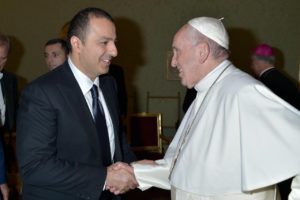 Pope Francis has endorsed and blessed a call of a council of the heads of monotheistic religions, an initiative of Akif Gilalov, Head of the World Congress of Mountain Jews. Scheduled to take place in the Vatican next year, the council will be chaired by the Pontiff himself. The announcement was made on Monday, November 5, at a meeting between the Pope and official Congress delegates.

The World Congress of Mountain Jews aims to mediate between religions and promote interconfessional peace.

It was the first-ever meeting of its kind: the Pope received representatives of the Congress as state delegates, which is very important not only for the Mountain Jews community but for all Jewish people as well. 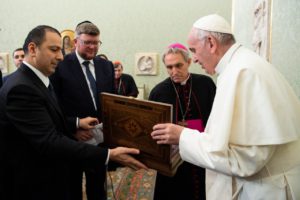 “The idea (to call the heads of monotheistic religions for a council) has been floating around for some time because there is a tendency to see religious intolerance as a root of many conflicts all over the globe. By creating such an institution, we will show that religious beliefs have nothing to do with crimes against humanity,” said Akif Gilalov, Head of the World Congress of Mountain Jews.

He stressed, “We have always lived among Muslims and Christians, and there have always been friendship and peace.” 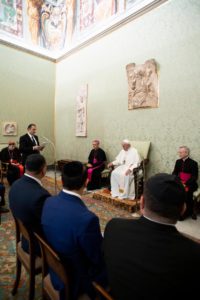 During the meeting with the delegates, the Pope called for the eradication of anti-Semitism. He also recalled that November 9 would mark the eightieth anniversary of the Kristallnacht, when a brutal wave of Jewish pogroms spread through Nazi Germany and Austria.

“Sadly, anti-Semitism continues to exist in our time. As I have often repeated, a Christian cannot be an anti-Semite; we share the same roots,” said the Pontiff, stressing the importance of dialog between confessions.

The Pope also mentioned the interreligious meeting he attended in Azerbaijan two years ago, where he saw once again different religions living together in peace. With dialog, love can overcome hatred, and now is not the time for violent or abrupt solutions, but rather an urgent moment to engage in “patient processes of reconciliation.”

“I ask the Almighty to bless our journey of friendship and trust so that we can dwell always in peace and be, wherever we find ourselves, artisans and builders of peace. Shalom aleichem!” said the Most Holy Father to the Head of the World Congress of Mountain Jews Akif Gilalov. 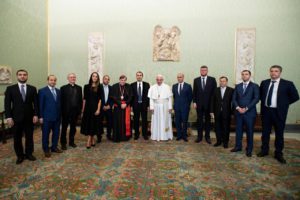 The World Congress of Mountain Jews (WCMJ) is an international non-governmental organization, founded in Tel Aviv in 2003. It unites Mountain Jews from Israel, Russia, Azerbaijan, France, Germany, Georgia, the UK, Moldova, Austria, Italy, China, the USA, and Canada. Consequently, the WCMJ coordinates the activity of more than 200 thousand people, who belong to this ancient sub-ethnic group.

A primary mission for the WCMJ is to preserve and develop the unique culture of the Mountain Jews. The history, language, and traditions can trace their roots back thousands of years. The Congress makes considerable efforts to protect the traditional heritage and lifestyle of the Mountain Jews, no matter where they live, by helping create community centers, educational and religious institutions, and supporting local communities.

The Congress implements charitable, publishing, religious, scientific and research projects, constantly developing contacts with leading international institutions.
In 2017, the World Congress of Mountain Jews was qualified as a non-governmental organization and obtained consultative status under the United Nations Economic and Social Council.