A considerable number of Mountain Jews arrived in Germany in the early 1990s during the mass migration of Soviet and post-Soviet Jews to Germany. 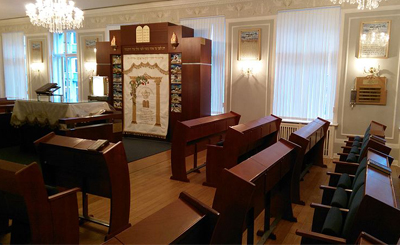 Outside of Berlin, Mountain Jews also live in Frankfurt am Main (60–80 people), Hamburg, Dortmund, Düsseldorf, Cologne, Munich, Nuremberg, Würzburg and Stuttgart. Most of them were born in Azerbaijan or Dagestan. Some of the Mountain Jews who currently live in Germany remigrated from Israel.

In September 2000, Berlin rabbi Avraam Daus called a minyan of Sephardi Jews at his apartment. This was very popular among the Mountain Jews, who wanted to pray according to their own ceremonies. Soon enough, the apartment could not accommodate everyone who came. In April 2006, the Tiferet Israel Sephardi synagogue opened on Passauerstrasse for Mountain Jews. The synagogue was named after a Sephardi synagogue that had existed in Berlin before the Nazis came to power and was attended by Jews who emigrated from the Ottoman Empire. Erhard Koerting, an internal affairs senator of Berlin, joined the opening ceremony, and on behalf of the city donated to the synagogue a scroll of the Torah written 200 years ago. Since its opening, Reuven Yakubov has been the synagogue’s rabbi (1977), and the chief rabbi of Berlin since 2008. In addition, the Jewish community of Berlin includes the Center of the Caucasus and Central Asia Jews, or the “Caucasian Club,” a meeting place primarily for the older generation (the director is Joseph Simkhaev). In December 2015, Emanuel Adinayev was elected to the Jewish Community Parliament in Berlin.

In Frankfurt am Main, Mountain Jews gather in a synagogue in the Frankfurt-Bornheim district. After the elections of July 3, 2016, Mikhail Bakhsiev joined the council of the Frankfurt Jewish Community.

The younger generation of Mountain Jews has integrated well in Germany. They study in German universities, as they believe education to be an important step in their future career, and work in various spheres, including culture and business. Some Mountain Jews who were educated in Germany now work in Moscow. The older generation feels more nostalgic for their former homeland. Yet for the old and young alike, Judaism and Jewish traditions remain the most important part of their identity, and they do not equate integration in the surrounding society with assimilation.