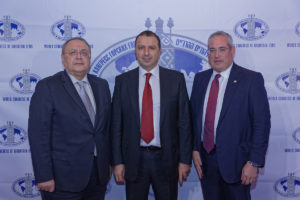 Thanks to international recognition of its legal status, the World Congress of Mountain Jews (WCMJ) has now entered a new phase of its development and is now able to attend discussions and platforms at an international level. The WCMJ held an event to commemorate the establishment of consultative status under the United Nations Economic and Social Council (ECOSOC).

On December 13, 2018, the United Nations Headquarters, New York, hosted an official reception with a presentation of the book entitled “The Mountain Jews.” Invitees included delegates from UN member states, American media, representatives of international organizations, UN permanent representatives and ambassadors, diplomats, prominent businessmen, politicians, artists, and academics. The book represents fundamental research on the history of the Mountain Jews: a project initiated and successfully implemented by Akif Gilalov, Head of the World Congress of Mountain Jews and Chairman of the Federation of the Russian Sephardi Communities.

Akif Gilalov is a businessman, philanthropist, owner of real estate, founder and chairman of Worlds Global Telecom, president of the ZAR Group, and owner of the West East Alliance that is certified for extraction and development of natural resources. 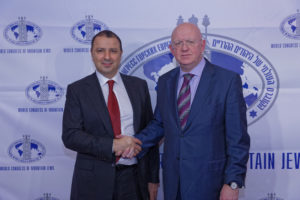 During the presentation, the Head of the WCMJ Akif Gilalov announced the creation of an intergovernmental organization for monotheistic religions to promote dialog, peace, and friendship among civilizations. The idea was inspired by the splendid example of the Mountain Jewish community living side by side with Christians and Muslims. “The Mountain Jews set an example of peaceful co-existence with different religions and ethnic groups. More importantly, it expands our horizons, since life in a multi-confessional and multi-ethnic society develops the mind and promotes understanding and respect,” stressed the Head of the World Congress of Mountain Jews Akif Gilalov.

Alison Smale, UN Under-Secretary-General for Global Communications, stressed the importance and significance of the Non-Governmental Organization. She claimed that the mission of the WCMJ is fully in line with the UN’s development goals. 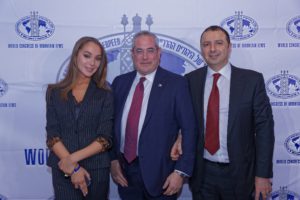 António Guterres, Secretary-General of the United Nations, in his message to the World Congress of Mountain Jews, expressed his best wishes for the success of the event.

Paul Packer, Chairman of the Commission for the Preservation of America’s Heritage Abroad, underlined the crucial role the WCMJ plays in preservation of cultural heritage for future generations. He also expressed his support for the WCMJ’s initiatives and confidence that the organization would achieve all its goals.

The event was also an occasion to announce a new international project by the WCMJ, entitled “Music Imprisoned.” Its purpose is to gather the music written by composers who died in concentration camps and bring it to a wide audience.

It is worth mentioning that on February 19, 2018, Akif Gilalov met the Prime Minister of Israel Benjamin Netanyahu in Jerusalem, where they discussed the future development of the WCMJ.

On October 9, 2018, the Moscow Government hosted an official presentation of the book “The Mountain Jews” under the initiative of the World Congress of Mountain Jews and the Federation of the Russian Sephardi Communities. The monograph considers the traditional and contemporary culture of the Mountain Jews, their ethnogenesis, and the status of modern Mountain Jewish groups in different countries. 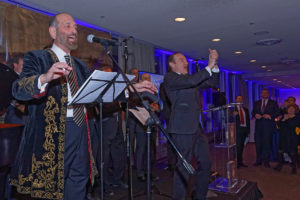 On November 5, 2018, Pope Francis welcomed a WCMJ delegation, headed by Akif Gilalov, in the Vatican. The Head of the Roman Catholic Church supported and blessed Akif Gilalov’s idea to create a Global Council of Monotheistic Religions. Its purpose is to promote the peaceful co-existence of different confessions. “I have always sought to emphasize the importance of friendship between Jews and Catholics based on fraternity and common roots. In these times, we are called upon to promote and expand interreligious dialog for the sake of humanity,” Pope Francis said in his speech. The Pontiff also claimed that, unfortunately, “anti-Semitic attitudes continue to exist in our time. As I have often repeated, a Christian cannot be an anti-Semite.” The first meeting of the Global Council of Monotheistic Religions is planned to take place in 2019 in the Vatican, under the chairmanship of Pope Francis.

On November 19, 2019, Jerusalem celebrated the Person of the Year 2018 award ceremony for a number of categories. The event was organized by the WCMJ in collaboration with the All-Israeli Union of Mountain Jews. 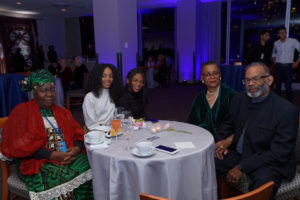 We recall that the World Congress of Mountain Jews was officially established on February 7, 2003, at the founding assembly in Tel Aviv (Israel). The main initiator of the Congress was the businessman and public figure Zaur Gilalov, who strove for integration of Mountain Jewish communities all over the world. Today there are about 200 thousand Mountain Jews across the world, in the USA, Israel, Russia, Germany, Azerbaijan, Canada, and Austria.