Toronto is home to the only Canadian community of Mountain Jews. It was formed after the dissolution of the USSR. At first, Mountain Jews here were members of the Jewish Russian Community Center (JRCC) led by rabbi Yoseph Zaltzman. 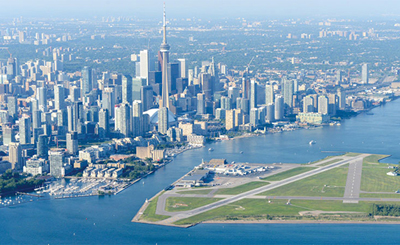 About 50% of the Mountain Jews of Toronto were born in Quba and Baku, 25% were born in Derbent, and the rest came from other regions. The absolute majority of community members is formed by Mountain Jews who remigrated to Canada from Israel. Many of their families are low-income with many children, where only one parent works.

In 2005, as many as 350 Mountain Jew families lived in Toronto; they organized the Association of Mountain Jews in Canada headed by Gimi Eldarov and Semyon Naftaliyev. Currently, the community embraces about 400 families that live mainly in the Northern York district, and has established a Board of Guardians with 20 members, including lawyers, doctors, financial industry experts, etc. The board exists to preserve and develop the traditions, culture and customs of the Mountain Jews. The community helps Mountain Jews find jobs, and also operates an immigration center, synagogue and a small museum called the History of Mountain Jews.

The Jewish Caucasus Community Center (JCCC), the cultural center of Mountain Jews in Canada, headed by Meir Osipov, was established in 2007.

The community arranges regular Rosh Chodeshs, woman’s classes for baking halla, and the annual delivery of pre-holiday food packages to Pesach. In 2008, representatives of the women’s organization of the Toronto community organized the international Children’s Talent Show festival in Toronto.

Since 2004, the community has been publishing its calendar: People and Time. Thanks to the efforts of poet Asaf Mushailov, that year also marked the beginning of the Russian-language magazine Zori Kavkaza (Dawns of the Caucasus). There is also a children’s dance ensemble of the same name.

The younger generation is widely integrated in local life both in New York and Toronto. The older generation, mainly due to the language barrier, is less capable of integration and tries to preserve its identity as Russian-speaking Jews.